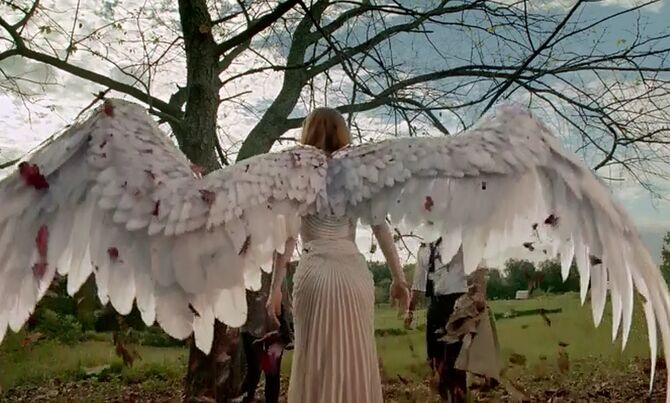 Angels are powerful, winged celestial beings, native to the realm of Heaven. They were created by God to serve as messengers and helpers to the creation, and also soldiers in the war against the Hell denizens.

The Angels are holy spirits that live in Heaven. They're generally benevolent, and, like Demons, they can use humans as hosts through possession. However, they opt not to do this in order to maintain the notion of free will in humans. Each Angel is compartmentalized as a part of a "plan" to keep the free will intact

An angels form is on par with a humans. The only major difference in their physiology is that Angels are able to manifest or retract a set of either white or black wings (depending on whether or not they are fallen). Humans are also normally unable to see Angels unless the Angel either chooses to reveal themselves or the human is in possession of a spiritual gift, for example psychic abilities.

If an Angels wings are damaged, they will immediately fall to earth and take on a more corporeal form and loose any access they may have had to their angelic powers. Once this has occurred the Angel will begin to slowly die and due to their being soulless beings will eventually cease to exist.

Their expulsion from Heaven can be also caused by indiscretions such as killing a mortal creature.

They serve generally as messengers and advisers, as they do not have permission to directly interfere in the lives of men in any way that would influence free will.

Humans are able to obtain at least some of the powers of an Angel. Imogen gave Zachary a feather from her wings, which not only resurrected him, but granted him the power to heal the sick. The cost of which was the transformation of the healed individual into a Ghoul.

Very little is known about the Angels' history, aside the Lucifer was an Angel before his fall, like great part of the Demons before their expulsion from Heaven