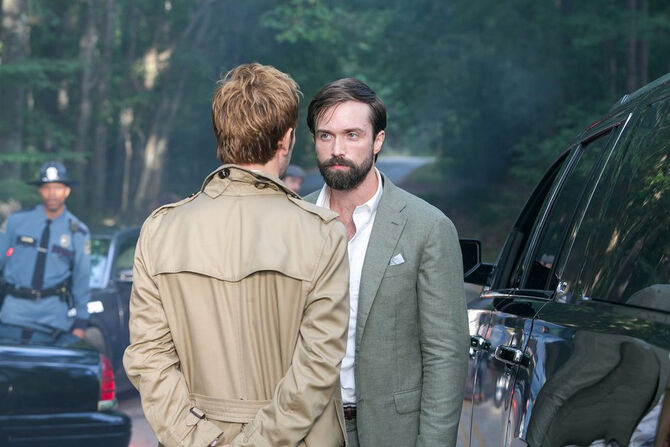 Danse Vaudou is the fifth episode of NBC's Constantine. It aired on November 21st, 2014.[1]

Constantine and Papa Midnite must join forces to lay rest a deadly threat. In New Orleans, Constantine’s unusual knowledge of a string of crimes gets him into trouble with Detective Jim Corrigan. He must form an unholy alliance with Papa Midnite when a voodoo ritual to help people communicate with their dead loved ones takes a deadly turn.[1]

The blood on the scrying map becomes wet at the site of New Orleans and the team reaches there. There they meet Detective Jim Corrigan, who the previous night had tried to shoot a female killer wearing face mask, who killed a young girl in front of him and now he is unable to understand what happened. But Zed had already seen a vision of Jimmy being taught to shoot by his mother. When going to their hotel, Zed sees the vision of deadly car crash near a tree with scars. They call and inform Jim and then go looking for it in the morning. But Jim thinks they are con-men and arrests John. Constantine asks Jim to look into similar deaths in the same vicinity. Jim finds similar cases in the past and tracks the earliest possible victims which happened years earlier. So he lets John out and John talks to the people connected from the earliest cases. He soon learns that the attacker of a former model (who had to wear a face mask to hide her scars and then committed suicide) and the grandmother of a young guy (who send him out of the house because of his drug problems and he died in a car crash) had both visited Papa Midnite and used him as a medium to talk to the dead. It turns out that Papa Midnite's medium spell was causing certain spirits to awaken, due to the rising darkness. Chas goes downtown to stop the killer woman ghost from killing again. She attacks him brutally and leaves him for dead, but Chas gets healed and walks away from the paramedics as if nothing happened. While Zed and Jim pick up the the young man's ghost and drive him around. Together John and Midnite agree to a temporary truce to send the spirits back to rest. Zed then receives a vision of Detective Corrigan dying and becoming the Spectre. Later John asks Midnite to use his sister Cedella's skull to find out how to deal with the rising darkness. Midnite tells him that the darkness was being heralded by someone close to him and he would be betrayed.

When John and Midnite are snatching the first body, one of the other graves is marked "Charles Devereaux". This is a reference to NBC's (the broadcasters of Constantine) programme 'Heroes', in which Charles Devereaux was a deceased character.