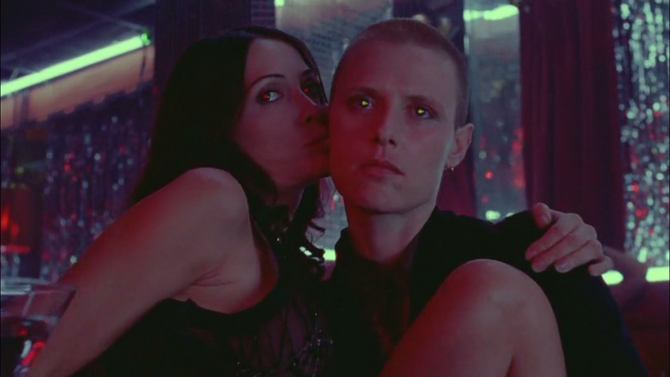 Half-Breeds are a cross between a Human with either an Angel or a Demon.

Half-Breeds can either be a Half-Breed Demon or a Half-Breed Angel. Half-Breeds exist to "maintain" balance on Earth since full-fledged Demons and Angels can't cross over to the mortal plane.

The fate of a slain Half-Breed Angel is unknown, however, it is known that burning the wings of a Half-Breed Angel causes the angel lose their powers. Thus, they "lose" their Angel side and retain their human side. These Angels are commonly referred to as 'Fallen Angels'

NOTE: Lucifer is referred to as a Fallen Angel, since the latter disobeyed God and left heaven. Lucifer is a full-fledged Angel.

Half-Breed Angels have yellow eyes, whereas Half-Breed Demons have red eyes. They are commonly found in Papa Midnite's Bar, a place where they peacefully co-exist.

Although Half-Breeds are considerably weaker than their originators, they are more than capable of standing up for themselves. It is arguable which sub species is more powerful.

According to Constantine "a whisper of a half-breed demon can turn your favourite pleasure to nightmare", we see Balthazar leaves the deceased and choked by insects Beeman (who was obsessed with insects as he mentioned to Constantine) and prevents Henessy (who always drinks to get away from "the voices") from sensing alcohol thus inadvertently drowned himself.

Balthazar; a half breed
Community content is available under CC-BY-SA unless otherwise noted.
Advertisement