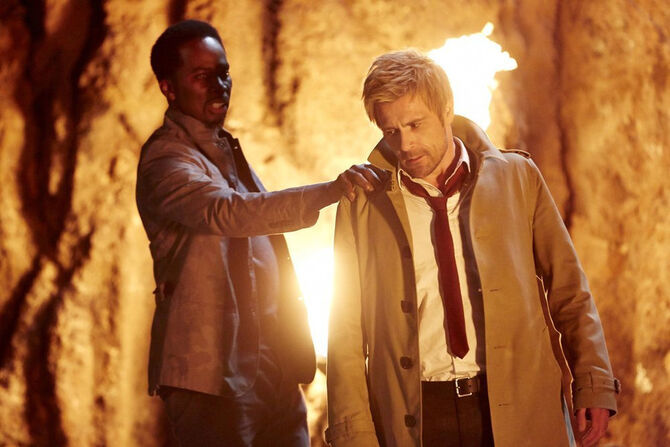 Based on the wildly popular comic book series “Hellblazer” from DC Comics, seasoned demon hunter and master of the occult John Constantine is armed with a ferocious knowledge of the dark arts and a wickedly naughty wit. He fights the good fight — or at least he did. With his soul already damned to hell, he’s decided to abandon his campaign against evil until a series of events thrusts him back into the fray when an old friend’s daughter becomes the target of supernatural forces. Harold Perrineau and Charles Halford also star.[2]

Following a botched exorcism which caused a demon that he conjured to murder a girl, John Constantine, a self-proclaimed exorcist and master of the dark arts, is damned to Hell, and now recovers in an asylum. Constantine receives a supernatural warning there, a woman possessed by his dead friend, Jasper Winters, which leads him to Liv Aberdine, Jasper's daughter, who is unaware of a mysterious threat. Constantine gives her a pendant that belonged to her father Jasper Winters and allows her to see trapped souls all around her, and John introduces her to scrying, the art of learning where demonic activity will occur. He learns the identity of the demon chasing Aberdine, Furcifer, who draws strength from electricity. Constantine enlists help from Ritchie Simpson, a pill-popping, paranoid metaphysics professor, who refuses until Constantine threatens to name him as a witness to the botched exorcism. They manage to trap Furcifer and send him back to hell. Liv later decides to leave town, but gives the scry map and the pendant to John to continue his work. He admits scaring her off on purpose, believing that the occult is not for everybody. Elsewhere, a woman furiously creates many drawings of John Constantine.