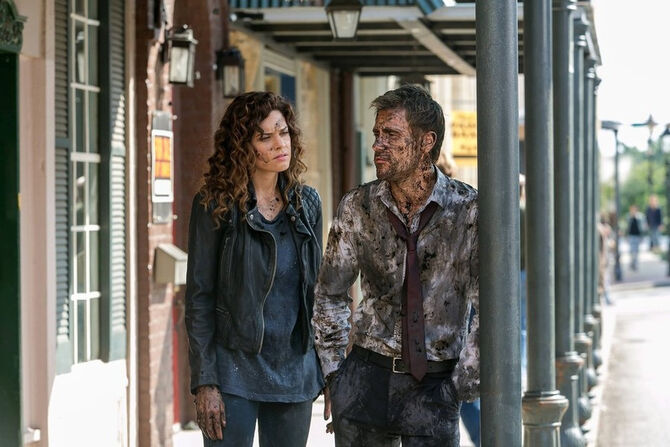 The Darkness Beneath Constantine Episode

The Darkness Beneath is the second episode of NBC's Constantine. It aired on October 31st, 2014.[1]

An Ancient Spirit torments a Pennsylvania mining town. Deep in the mountains of Western Pennsylvania, John is a small mining community’s only defense against an ancient Welsh spirit. In the course of protecting these isolated innocents, John finds a vital new ally in a mysterious young woman named Zed. [1]

When a fresh drop of blood appears on the scry map, highlighting a small mining town in Western Pennsylvania, Constantine learns that several miners have been mysteriously killed. He deduces that these were caused by Coblynau, normally benign spirits of deceased miners who are being summoned and forced to kill. In town John bumps into Zed Martin, a woman with a mysterious past, and who recognizes him as the man who has been appearing in her visions. Constantine realizes that she has psychic powers, and uses her in his investigation of the town. They discover that the source of the curse is a Romani woman who summoned the spirits to punish the mine bosses and kill her husband. After the woman is killed by the spirits she summoned, Zed agrees to join in John's fight against the coming evil.