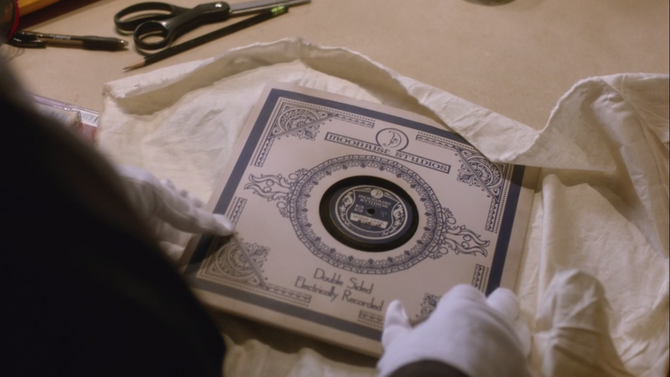 NOTE: This article is about the object. For the episode, see The Devil's Vinyl.

The Devil's Vinyl is a cursed, old acetate recording that contains The First of the Fallen's voice.

Decades ago, a blues musician by the name of Willy Cole, who had sold his soul to the devil, recorded on an acetate in Marcus Mooney's Studio on the same night that The First of the Fallen came to claim his soul. Marcus found the record in the studio and tried to destroy it, but after constant failure, he hid it instead.

Many years later, a private investigator bribes Marcus into giving up the acetate's location. The investigator, who turns out to be Jasmine Fell, gives the acetate to Bernie Reed to perform a spectral analysis on it. Bernie, although warned not to, listens to the recording, which burns off his ears, and forces him to stab himself.

Bernie's suicide attracts the attention of John Constantine, who investigates his friend's apparent suicide. John gets clues by resurrecting Bernie for a brief moment, and later questions a dying Marcus Mooney about it. Marcus tells John about the acetate, who John himself believes it's a myth, and about the private investigator. Marcus dies shortly after.

The acetate also catches the interest of the voodoo priest, Papa Midnite, who instructs his men to go after the acetate. His men take the acetate from the Fell's, and they both fall under it's effects. The men go on a rampage, until they, along with the acetate are damned back to hell by John.

Since the acetate recorded the voice of the First of the Fallen, it is virtually indestructible. The acetate itself is cold to the touch.

There are two effects that the recording has on people who listen to it.