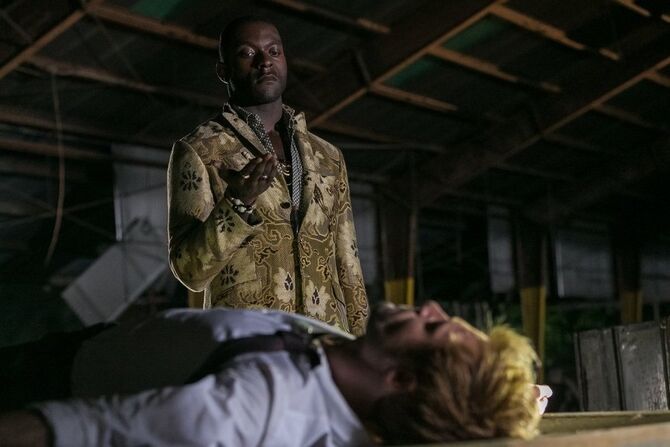 The Devil's Vinyl is the third episode of NBC's Constantine. It aired on November 7th, 2014.

A desperate wife must make a deal with the Devil to save her husband's life. John and Zed engage in a dangerous confrontation to save a woman and her family from sinister forces. John’s efforts force him to confront the darkness in his own life – while also coming face to face with a new powerful adversary in Papa Midnite.[1]

John and Zed travel to Chicago, in search of Memphis bluesman Willy Cole's record, known as the Acetate. Legend has it that the Acetate contains the voice of the devil himself, which was recorded on when the devil came to claim Cole's soul during a recording session. The record is known to slowly freeze things on contact and anyone who hears the song becomes possessed and/or dies. John and Zed also learn that Papa Midnite, a voodoo priest, wants the record to avoid having his soul sent to hell, and that Midnite's hired men, having become possessed themselves, also want to broadcast the song to as many people as possible. After preventing them from playing it on a radio station, Constantine is able to send it to Hell where it belongs with Papa Midnite swearing vengeance afterwards.